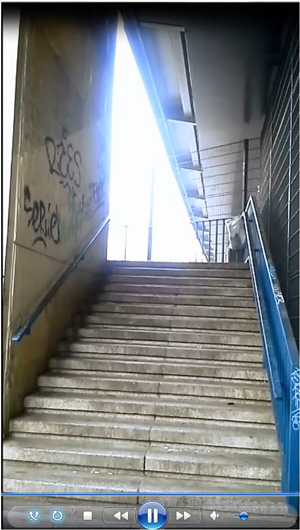 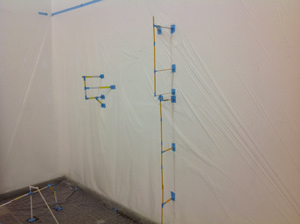 A sculptural installation of makeshift objects and spaces arising from research into the landscape of Moabit. The installation is a series of sculptural propositions, not an attempt to represent my research or the place. 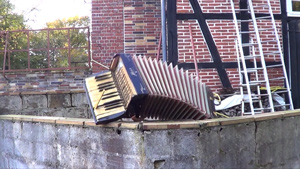 by Matthias Kaul and Neele Hülcker

These series of videos show our experiments with old broken accordions that normally are thrown away. We think that they are ready for a second life as musical instruments for physical questions.

We bound ourselves by contract to record ourselves speaking out the date of the day everyday until the end of our lives. We are interested in different aspects of the project. On the one hand the existentialistic aspect: with this project we directly engage with our whole life. The time of our project and our lifetime become one, the idea becomes part of our life, every day anew. We start out from the very personal and intimate, from our own voice, and point to something basic, concerning every person in the world: the expiring of lifetime and physical decline. Art and life melt into each other by necessity: the rest of our lives will be influenced by this project and our everyday life is present on the recordings: one can hear sensitivities in our voices, background noises and the changing color of our voices through the ages.

The last exhibitions of "TAGE" have been installed in the sound gallery Ohrenhoch - der Geräuschladen, in Berlin. 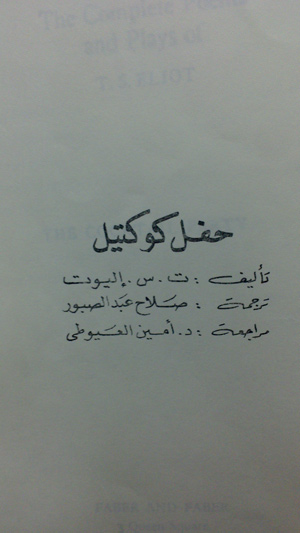 Wirad Kaddo and Reham Alkassar will screen their movies and talk about their theater movement starting from the group SODOM, who they are, as well as about their art works (film and theater) and the concept of it. They will also talk about the new play they are working on at ZK/U (The cocktail party) for T.S. ELIOT.

Sodom is a young Syrian-German theater collective in formation. Most of it's members have previously cooperated on different projects. The play Farewell, Salmons was a starting point and first chapter of their artistic discussion of current social and political issues and is now booked as a guest show in arkadaş-theater Cologne and Heimathafen Neukölln.

While working on Farewell, Salmons, the aim of SODOM was to open a – rather bleak – perspective on what comes after the conflict. What will society make itself out to be? Is the history of violence going to be continued within the Syrian and other societies? What will power relations look like and what are the (new?) spaces of violence and destruction? This frame of thoughts and questions and the historical presence of Berlin guided them to their new project, which will have T.S. Eliot's play 'Cocktail Party' as a dramatic skeleton. But instead of couples fighting on stage they want to confront Syrians and Germans with some of the pressing moral and social questions of the(ir) presence. 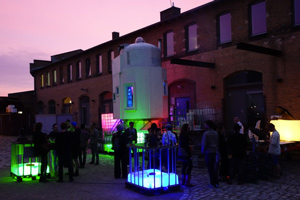 As a contraposition to the standard perception of architecture and as a reaction to a dynamic life as garbage architect and international 3D troubleshooter, I developed a dynamic and mobile living structure from a grain silo and a selection of local waste materials. Various simple but logical technical systems enable the silo to be almost independent of civilization, e.g. the shower which works on 5 liter circulated water. In order to look from a different angle at the standard way of living, I started to live with my daughter in the experimental house, which we moved to Berlin at the end of july 2013. The 'silo city' project in Berlin questions the general dynamics in housing and public space, inviting contrasting groups of society to experience the other side of mobility and architecture, from doctors to lawyers, through workers and gardeners to politicians and musicians. 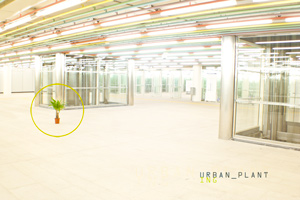 For this Openhaus, curator in residence Teodora Kotseva will present artist Michaela Lakova, graduate from the Piet Zwart Institute in Rotterdam.

Urban planting is an attempt to explore and interact with the rhythm in the city. It is my first personal observation of how and to what extend I can provoke a reaction to a small action: a type of social intervention in public space. I placed a plant - a common interior feature but in this case out of its context - at the Rotterdam metro station. I intentionally positioned it in the middle of the sidewalk, on the way of the passers-by where it frequently became an object of illumination by numerous fluorescent lights and CCTV cameras. I found myself and my non-depict form of intervention in the spotlight, overexposed, monitored and investigated. Thereby neither the absurdity of the object by itself, nor the audience’s bare reaction was central; instead it was the authority’s, in particular the security’s response that became the main event of the action.

Teodora Kotseva is a Dutch, for the time being Berlin-based art manager and curator. During her stay at ZK/U she will assume the position of in-house curator, or most accurately producer. She will work both with resident and invited artists as well as cultural workers on occasions ranging from exhibitions, talks, film programmes etc. 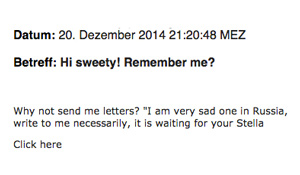 Work in progress research about trust based on spam emails. 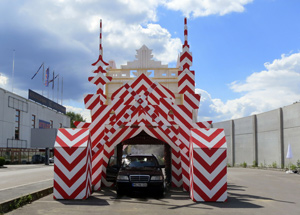 On highway A40, the main arterial road through the Ruhr region, KUNSTrePUBLIK turns its attention toward the driving population. The washing portal Tor des Westens (Gate of the West) serves as a welcoming facility for those coming to Germany from distant lands.

An experiment with the possibilities of multimedia cartography takes place through personal experiences and interdisciplinary approaches connecting two remote territories. One is Complexo do Alemão (“complex of the german guy”/ “german complex”), a group of 16 favela communities located in Rio de Janeiro, Brazil, and the other is Berlin, Germany. The way I inhabit Alemão, being now in Berlin, and vice versa, being a sort of stranger in both places, leads me to some other kind of “territory”, yet to be explored (and shared) as both places are projected one onto the other, recombined or remixed in image, imagination, sound, text, conversation, history, fiction, telepresence: “synchroni-cities” in progress… 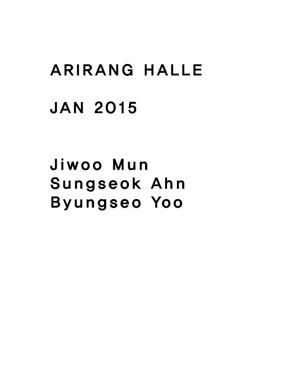 During the 1st session of a"Arirang halle" works by Jiwoo Mun, Sungseok Ahn and Byungseo Yoo will be presented in the main hall.