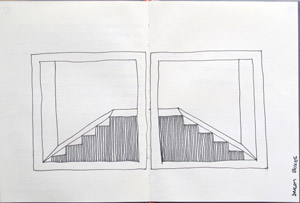 Considering her research on transitional spaces and spaces in between, that are on the verge of being and disappearing, the ladder enters as an element that connects two realities: a flight or series of steps for going from one level to another.

The dream boxes work as a small flying device, a portable passage, as if people could have them as an access, a window, a path to another place.

The stairs down to Turmstraße subway station also take the bystanders to parallel realities, inviting them to create other relationships with the mysterious space of the stations through an intervention on the advertisement boards. 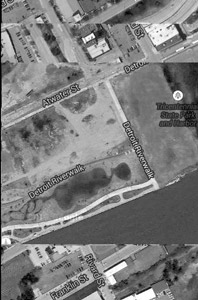 Nasty Neighbor is a research-based project that aims to create an archeology of music by looking at the movements of immigrants in the city through urban renewal. The city is not being understood anymore as a physical structure. Just like the music, it evolves through integration of immigrants and different community formations. Streets, public life, neighborhoods and urban events continuously shape the urban texture as well as its sound. To present the development of the project, the artists introduce an analogy between techno music and the city. They deconstruct urban patterns to reconstruct alternative patterns of built and unbuilt, infrastructure, streets, green areas, etc. and highlight the relationships between them and sound in an interactive installation. 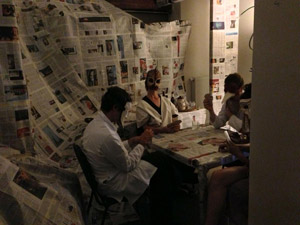 In the summer of 2013, the sometimes vilified sometimes praised POYAIS GROUP appears in Berlin

and performs many strange and wonderful deeds to closed audiences.

Yet, for one night in August, this astounding troupe will open their workshop to the general public and disclose some of their methods.

Those who like secret things and life lived as if it were a dream (it is) -- please come to view Poyais costumes, Poyais equipment and evidence of Poyais deeds.