A project by R. Stein Wexler at Haus der Statistik

Twist of Fate is a community-engaged investigation of invisible histories and contemporary urban redevelopment in Berlin.

Given the Karl Marx Allee neighborhood’s fame as a model post-war modernism housing development, histories prior to the Cold War have typically gone overlooked. The highly publicized re-use of the Haus der Statistik as a creative and residential development has ensured the preservation of the architecture and narrative of the building, while Fügung des Schicksals will unearth and voice the history concealed beneath it.

The Gerlachstraße Jüdisches Altenheim, located at Gerlachstraße 18-21, was a Jewish home for the elderly. During WWII, the home was seized and used as a Nazi collection point for elderly Jews being transported to concentration camps. In the late 1960s, structures on the site that were not destroyed by Allied bombing were razed to make way for the DDR's Haus der Statistik. The Altenheim had been requested to be listed under historic preservation years before the demolition. Though some efforts have been made to memorialize Berlin’s Nazi deportation sites, The Mitte Museum notes the Gerlachstraße Jüdisches Altenheim remains unrecognized.

In 2015, the massive, vacant Haus der Statistik complex became the subject of a collaborative, community-oriented redevelopment project. The planned overhaul of the site presents an opportunity to engage the current and future residential community and creative tenants at the Haus der Statistik with the silenced history post-war urban development has obscured.

Read and remember together

Remembering the names of the dead by having those alive today read them out.

Opening of the installation 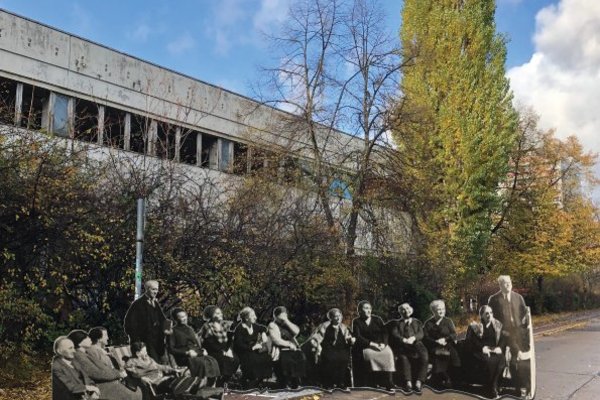