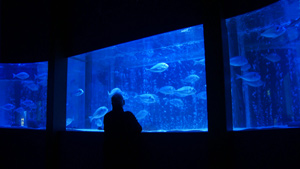 'When I was 12 years old my father left us to return to Palestine. His dream to build a house and pursue the fight for freedom in Palestine failed. He was expelled by the Israelis. Suddenly he was back in Berlin, ringing at our front door. My mother looked at him, did not say a word and let him in. Now he spends his days sitting in the cellar of our small row house. Withdrawn in his turtle shell. My mother lives upstairs. They are not fighting anymore. They try not to cross each other´s path. Not a sound is to be heard. Only the creaking steps of my mother on the stairs. The whirr of the television. And my nagging questions to my father.

The Turtle´s Rage tells the story of a mysterious man, whose life has been molded by flight, expulsion, life in exile and the failed return to Palestine. A torn biography which was affected tremendously by the Israeli-Palestinian conflict. The film is composed of a daughter’s search for answers from her father. Answers he cannot give.

A road movie crossing Egypt, Palestine and Jordan. Father and daughter: Fighting at the airport. Singing with the cab drivers. Lonely nights in hotels. Negotiations at abandoned gas stations. Drinking beer in the Naqab-desert. A story traversed by many nuances, which makes it nearly impossible to think in categories like good and bad, victim and offender or black and white.'

As an introduction to the screening: Spoken Word by Hanna Al Taher 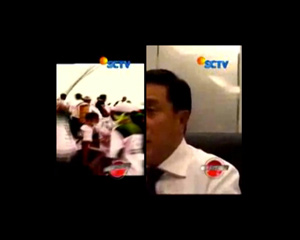 A trilogy of video collage that portrays the social-political situation in Indonesia since the country’s regime fall down. In the last 15 years, many mass organizations have come to the fore and some of them grab public attention in an agressive way. Rika Febriyani uses materials from YouTube to capture how the television news and the citizen’s records transcribe the mass movements.

A series of 10 –15 photographs of "remainders" in Berlin public space – such as discarded objects, wasted spaces, apparently useless parctices – showing how they act as devices to construct a milieu not readily subsumable to apparent systems of value, and thus permit a means of connecting this public space to those of other cities in which the artist has lived and worked. The artist will attempt to convey a "sense" of how these remainders explore different connections to the larger surroundings and her own experience. 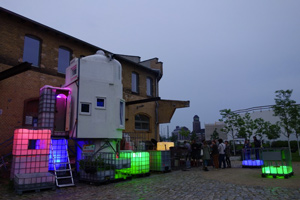 "As a contraposition to the standard perception of architecture and as a reaction to a dynamic life as garbage architect and international 3D troubleshooter, I developed a dynamic and mobile living structure from a grain silo and a selection of local waste materials. Various simple but logical technical systems enable the  silo to be almost independent of civilization, e.g. the shower which works on 5 liter circulated water. In order to look from a different angle at the standard way of living, I started to live with my daughter in the experimental house, which we moved to Berlin at the end of july 2013. The 'silo city' project in Berlin questions the general dynamics in housing and public space, inviting contrasting groups of society to experience the other side of mobility and architecture, from doctors to lawyers, through workers and gardeners to politicians and musicians."

This is the first map from the series, "Location Conversations" that Sheri Simons is working on in Berlin. All of the maps have eliminated the streets and names in exchange for a singular aspect of the city's landmarks. Each map focuses on just one of these. The map after "Berlin Water 1:20,000" will be "Tors 1:23,000", followed by "Police Stations 1:20,000". Viewers are asked to participate in the completion of these incomplete cartographies by mapping their personal memories and routes, creating a cumulative document of their experience of the city seen in relation to selected elements.